Last week saw a flurry of activity and announcements from Wye Oak. The band, originally from Baltimore but now spread across the USA, have announced the release of their fourth studio album, Shriek, on April 29th and the first track to be released from it, “The Tower”, has been played on various radio stations and podcasts and a video has been doing the rounds online.

Last year, when discussing the new album, Jenn Wasner and Andy Stack revealed that it would feature no guitars. This news came despite an August 2012 concert broadcast by NPR where the band debuted 2 new songs, both very heavy on guitar and both astonishingly good. However in the year and a half since then, the band has progressed and those songs seem to have fallen by the wayside. 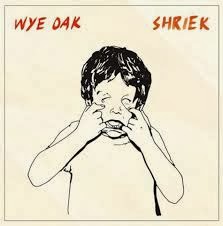 For most people writing about Wye Oak's new material, this new direction is what they focus on. That a band known for their big, engulfing guitar sound could so easily and skilfully abandon their trademark noise in favour of an equally floaty and etherial electronic sound is astonishing to some people. However to my mind, the shift in direction isn't all that surprising given Jenn Wasner's work outside of the band. For the last couple of years Wye Oak have been fairly quiet on the release front. Their last album, the wonderful, haunting and noisy Civilian came out in 2011 and other than a single consisting of two covers recorded for the AV Club and the free download “Spiral”, there have not been any official releases from Wye Oak since. One of the main reasons for this is that Wasner has turned her attention to other projects, namely Flock Of Dimes and Dungeonese.

A collaboration between Wasner and Jon Ehrens (White Life, Art Department), the Dungeonese album, is a catchy, vibrant and at times odd mix of pop, electronica and 90's R&B. It's just the right combination of interesting and clever production and songwriting and catchy pop hooks. The whole album features Wasner's vocal talents, but none of her guitar work (as Jason Narducy from Bob Mould's band said in a tweet "Jenn Wasner could sing the fucking phone book and I'd buy it"). Likewise, Flock Of Dimes is a quirky, eclectic electronic solo-project of Wassner's, which is rather sparse on the guitar front. Wasner is a skilled and inventive guitarist but what the last year has made obvious, is that she is first and foremost a songwriter and the song is of more importance than the instruments used to make it.

It makes perfect sense to me that Wasner and Stack have gone in new direction for this record. As artists, there is a strong need to keep evolving, changing styles and approaches. Collaborations with artists outside of Wye Oak are only going to help fuel those changes. “The Tower” feels like a natural progression for a band who have been exploring what they can do outside of what's expected of them.
Posted by Elliott at 22:16