Give A Glimpse Of What Yer Not - Dinosaur Jr 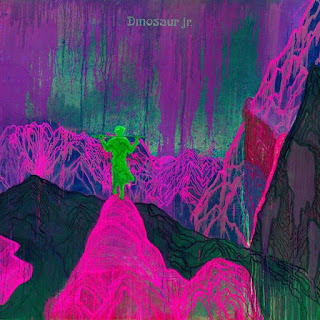 Dinosaur Jr are one of American indie rock’s most interesting stories. Loud, loose and noisey but with a strong sense of melody, not to mention some some of the best musicianship in the punk scene, they were one of the most beloved bands of the late 80’s underground. Along with many other groups of the era, they signed to a major label and had some commercial success during the early 1990’s when alternative rock was thrust into the mainstream. However by that point, the original band had crumbled due to clashing personalities. So for most of their major label period, the band consisted of guitarist/singer J Mascis and various session musicians, before Mascis finally retired the Dinosaur Jr name in 1997. The story of the band has been well covered and for an engaging and more detailed account of the early history of Dinosaur Jr, I can thoroughly recommend the band’s chapter in Michael Azzerad’s “Our Band Could Be Your Life”.

In the early part of this century, after both J Mascis and bassist Lou Barlow (also of Sebadoh and Folk Implosion) had embarked on decent solo careers and Azzerad’s book had generated some renewed interest in the band, the original line up of Dinosaur Jr reformed and have just released the 11th studio album with the band’s name on it.

Give a Glimpse of What Yer Not, is not an album that you could mistake for a record by any other band. Even down to the cover, toned with copious amounts of purple (Mascis colour of choice), this is clearly a Dinosaur Jr album. Even before the first note, you know what you’re in for. “Goin' Down” has all the hallmarks of a classic Dinosaur Jr song. Chugging power chords, a strong drum beat, Mascis' slack vocals and the beguiling guitar flourishes that he uses to punctuate his songs. As expected there is a powerful solo, delivered in Mascis’ signature style. In fact it’s so much of that style that it seems eerily familiar, perhaps plagiarised from one of the band’s earlier records?

“Tiny” again harks back to the band’s earlier work, this time taking on some of the smoother edges that the band adopted in the 90’s. With it’s catchy, memorable melody it’s easy to guess why this was chosen as the album’s lead single. Whilst “I Told Everyone” and “Good To Know” both serve to prove that Mascis hasn’t lost his ability to write fantastic guitar riffs, his best guitar solo in the first half of the album is reserved for the Lou Barlow penned “Love Is…”, one of Barlow’s two contributions to the album. Not surprisingly, it’s Barlow’s songs that depart the most from what would be considered “The Dinosaur Jr Sound” and feature instrumentation that, in a rare move, steps ever so slightly away from the guitar, bass, drums formula of most of the band’s other songs.

“I Walk For Miles” find’s the band exploring early Black Sabbath territory with a heavier sound than usual. It’s not an unwelcome change of pace and serves as a bit of a break because as soon as “Lost All Day” starts, we are back on familiar ground.

“Knocked Around” and “Mirror” don’t deviate much from what you would expect, though the first half of “Knocked Around” is far softer than the rest of the record. Mascis’ signature guitar tone is still present though, leading the listener to expect (correctly in this case) that soon the gloves will come off and the volume will go up.

The most surprising cut on the album is saved for last. Lou Barlow’s “Left/Right” is a bit more experimental than the rest of the album. There’s some synthesiser drones mixed in and whilst it’s not a total departure from what we’ve come to expect here, there is at least some room for movement.

Overall, I like this album. It fulfils what I want and expect from a Dinosaur Jr album in pretty much every way. But, inevitably perhaps, it’s not their best work. There is nothing here to truly surprise me. The lyrics that focus on social isolation and lost love are the same as they’ve ever been and each song on this album has a well worn, familiar feel to it. The album’s title, Give a Glimpse of What Yer Not, seems almost prophetic in that there really are only brief glimpses of the musically unexpected on this record.

If Dinosaur Jr were a younger band, this would be anathema. But as a band that have been going for over 30 years on and off, they’ve created a legacy and a signature sound. One that is often imitated but never equalled. It’s not that they’ve never deviated from the formula (check out the trumpet part on 1997’s “I’m Insane”) but after decades together and apart, they seem very much aware of where their strengths lie and they’re going to keep playing to them.